On this page you will find a collection of some fractal images I computed on my own.

I was inspired by Pickover’s great book CPCB1 to explore the chaotic maps using self-written code. But I am no expert and if you want to know how this stuff works, you’d be better off reading his book.

Basically, for each pixel in these images, a feedback-loop is run on their coordinates until one of several conditions is fulfilled that causes the loop to halt. Depending on the exact parameters reached when stopping, the computed pixel is coloured differently. These conditional checks are also called convergence-tests of which Pickover introduced three and accidentally found a fourth one because of a bug in his code.2 Modifying this network slightly leads to something interesting that reminds me of mitosis of microorganisms: 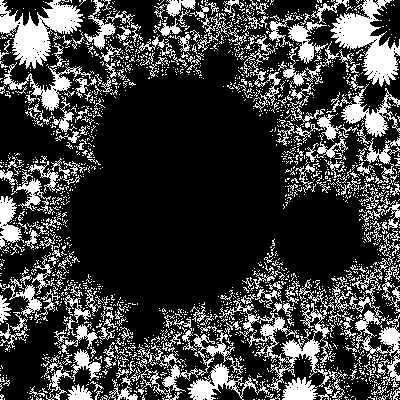 These are the four tests that were used to compute the images:

The constant \(\tau\) is used as a threshold to define when a value is considered to have diverged. For the current number of iterations, \(j\) is used instead of \(i\) to prevent confusion with the imaginary unit.