In Atlantean Greek mythology, Helios resembles the personification of the Sun. Although in ancient Greek mythology there is Apollo related with the Sun, he is actually known as god of sunlight. Helios is the previous generation of Greek gods and they are named as titans.

The first of all deities in Greek was the Chaos. It is actually a being made of a void. Then Chaos created the primordials. Two of most famous of them were Oranos and Gaia. Oranos’ name was given to a planet as Uranus. Oranos aka the skyfather. He was reponsible for outspace and heaven. Meanwhile his sister and waifu Gaia was responsible for the Earth. Gaia was earth’s itself. 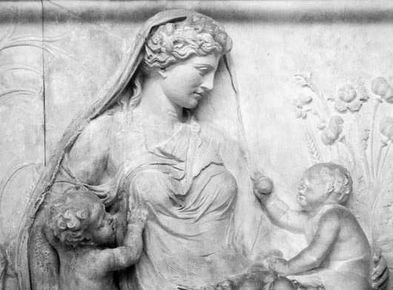 There were many other primordials such as the night aka Nyx or the sleep aka Hypnos or the ocean aka Oceanus. Primordials were generally amortals but Oranos was perfectionist. They fucked and made titans and all of mythical creatures such as giants, cyclops and mermaids. But Oranos hated his children cuz they were monsters. Then he wanted to kill ‘em all.

Chronos, one of his children came together with other 3 titan siblings. They took Oranos’ weapon from Gaia. Then children hold legs and arms of Oranos. Chronos took the weapon to cut Oranos into pieces and spread all of the parts across universe. Cuz they were too far away they wouldn’t be able to come together. But this didnt mean he is really dead, he just broke apart. One of the pieces fell to earth and it reborn as Aphrodite aka the titan of beutyu beauty.

Aphrodisiac comes from Aphrodite. Then creatures and titans lived the generation. Aaaaand - Chronos fucked Gaia. And they had children. Zeus, Poseidon, Hades. However Chronos had same destiny as his daddy had. He swallowed all of his children including these three. But they escaped from him somehow. Then they killed Chronos.

Zeus became the president god. Yeah his all dammit power is ruling. Meanwhile Poseidon became lord of 7 seas. We call them as oceans. Pirates call them as 7 seas as well.

Hades became the ruler of underworld. But it is literally under the world. Under the top layer of earth there is Tartarus and from Tartarus to underworld there is a river. Tartarus is a giant living cave. Even gods can’t escape from there. Also it is a child of Gaia.

Anyways, because Zeus was a fucking weakling, Hephaestus the famous god weapon blacksmith made a lightning weapon for him. Hephaestus is an abomination according to Illiad and Odyssey. His upper body is larger and lower body is small. All gods on olympos bully him. Sometimes Hephaestus invite gods to his home and serve drinks them.

Chronos was force into Tartarus by Gaia and Hades as well as other major gods such as Zeus as Gaia had just as much power as Zeus in the underworld due to it being part of the astral plane. Chronos had power of time bending. He was that powerful and his power wasn’t bound to an area such as earth. I bet he can jump in time and got rid of his fate. But he is darn idiot. He has power but no brain.

Tartarus is known as a timeless prison. He can freeze others in time as well. So chronos had no power there (that theory changes in different sources). Gaia was much weaker in hell but could, in a sense, bend time due to her being a parent of Chronos.

Meanwhile Prometheus made the first human by stealing eternal fire. He called them as Prometheans. But they were abominations made of mud and clay. Prometheus was the first demi-god. He was a titan. But he got caught and punished to eternal ending-resurrection. Animals were eating his organs alive and they were healing. He is one of those figures that changes massively based on the tale as he was a demi-god and forced to be chained to a rock while being tortured. But he is a titan. Titans never slept with creatures as far as I know. There was no human in that generation. But Zeus slept with all species and several gods. He has countless, god, demi-god and creature children. It is a gigantic harem.

So what do we learn from this?