The Timelines of Recursion

Good day everyone, nice to see you again. Today, I would like to share a great book with you and discuss its story a little.

With a few years delay after it came out in 2016, I have read Dark Matter by Blake Crouch1 this summer. I was a little sceptical whether I would like the story so much that I would overlook the somewhat far-fetched physical details. And certainly, I did, as I rated it 5/5. Just this week, I started reading his latest book Recursion2. Considering that my free time was very limited, it was a pretty fast read for me. And damn it was great.

I mean, when thinking about it now, the concept of “time travelling” through memories isn’t blowing me away too much—at least not as much as it did whilst reading. At least it’s not as much unrealistic as Dark Matter’s physics because it comes with a lot more philosophical aspects which I liked to think about. Crouch really went all-in with this plot, and I couldn’t imagine more dramatic events compared to what he served up. Anyways, this post is not meant to be a review of the book (there are already plenty).

Instead, I am going to give my best to visualize the story and explain all major timelines in as much detail as makes sense. The book neither follows a time-based order, nor does it always stick with the direction of causation as Crouch shuffles the time snippets in a way that provides the most thrilling buildup. My goal is now to put everything in the correct order.3

Again, if you haven’t read the book yet but you plan to do so, you probably do not want to continue!

First, some notes to support further understanding of the mechanics of the chair and the timelines Crouch described:

Below is a small preview of what I’ve put together. Click on it to open the diagram in a new tab where you can zoom in and pan around; zoom controls are on the top left of the screen. If you read this on a phone, you should long-hold the image and open the picture instead as navigation is easier here. Check the legend box on the right first to understand what each line or symbol means. 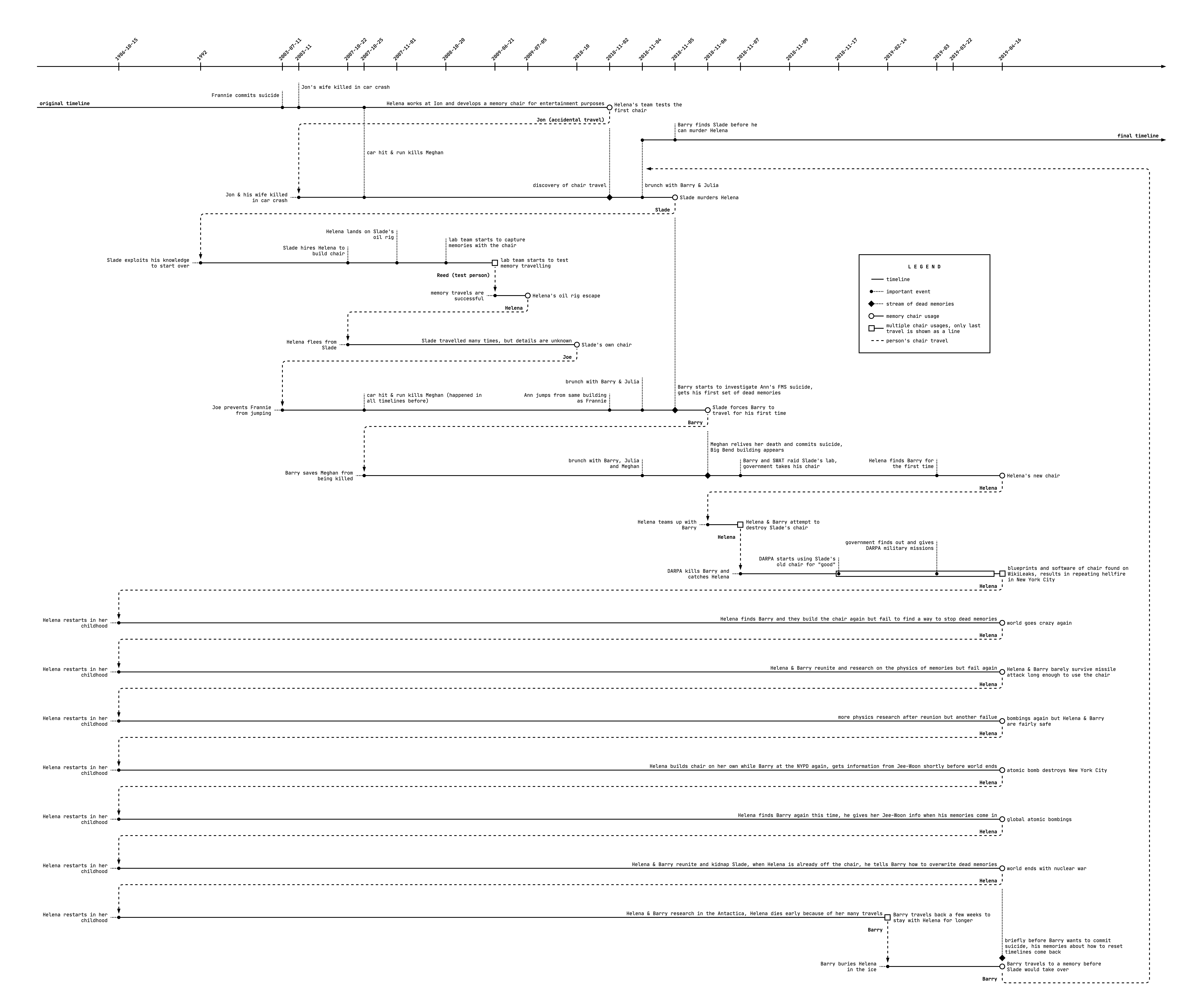 I hope I haven’t forgotten anything important, but if I have, feel free to write me a comment below and I will try to update the graphics. By creating it I have dealt with the book quite extensively and often skimmed back and forth. So if you have also read the book and don’t understand something, I might as well be able to help you.